Two sisters united by a PaintFest

It’s been six months since we wrapped up our last stop of PaintFest America. The trees are bare here in Marietta, Georgia, and the sweltering days of summer are far behind us. Winter is here, or at least it visits from time to time, and the hustle and bustle of countless preparations for our 50-state bonanza is becoming a distant memory.

All of the murals that were painted in each stop across the country have been touched up and are now hanging in their respective hospitals. But as we learned in mid-December, PaintFest America isn’t over. It will never be over.

Just before Christmas, we received an email from a participant who wanted to express just how much the project meant to her and her family. Tears were abounding as each member of our team sat down to read her sentiments.

When I called Bonnie Griffith of Louisville, Kentucky for an interview the other day, I was received by a jubilant and cheerful woman who had just finished chopping up celery for her lentil stew. She informed me that she was part of a soup swap, as well as a juicing club; and I immediately started imagining the smell of wheatgrass and the thundering pulse of blenders ringing in my ears. Soon thereafter, I learned that Bonnie was originally from Western Massachusetts; and with the Falcons and Patriots Super Bowl match-up around the corner, she said she was a little worried about bringing up football on our call. Fortunately for her, she was safe with me. I’m originally from New England too.

But, we didn’t set up a call to talk about wheatgrass and the Pats, although, those are fun topics. Instead, we arranged to speak because of the way that Bonnie and her sister Connie’s  PaintFest America story had touched us.

When I asked Bonnie how she first heard about PaintFest America, she told me about her journey as a cancer survivor, and the benefits that her hospital provided for her during her treatment and continues to provide for her now. She was offered free massages, yoga classes, tai chi, and art therapy classes, among other things. But as soon as the word art came out of her mouth, her energy shifted, and her passion was clear. Til this day, Bonnie goes to art class every Thursday, and it was her teacher Emily that had promoted the PaintFest America event that would be taking place in their hospital (Norton Cancer Institute) on July 21st.

Now this is where the story gets fun, because the 21st of July is Bonnie’s birthday! However, she battled quite the predicament, because as a devout Patriots fan, she spends every birthday at training camp watching her beloved team prepare for the upcoming season. What to do! As it turns out, this year the Pats would start training camp a little later in the month, freeing up Bonnie to participate in PaintFest America. So she gathered up a few of her friends from her juice club, painted the day away, and got some fresh juice across the street to cap it off.

And then she had a thought.

Her younger sister Connie, a self proclaimed “handicapable” woman, would love this. The timing would work out perfectly. Bonnie would go up to Foxboro for training camp and visit her sister. PaintFest America would roll through Dartmouth in New Hampshire on the 16th of August and she would bring Connie to the event. When speaking with Bonnie, I was touched by her devotion to her sister. Being housebound, Bonnie expressed the importance of getting Connie out and about as often as possible, whether from her apartment to the grocery store, a scenic car ride, or in this case, PaintFest America.

But wait, there would be training camp on the 16th! Once again, Bonnie faced a predicament. Being a Boston sports fan is not for the faint of heart. But alas, the fates were in her favor, and that would be an off day.

So Bonnie and Connie loaded into the car at 6 am on the 16th of August and made their way to New Hampshire for a day of painting at the Hitchcock Norris Cotton Cancer Center. On the phone call, as we were recounting the event, Bonnie kept mentioning “this nice couple”. Immediately I knew who she was speaking about, our long time, super volunteers Sheila and Lamont Glover. She was floored by their kindness, and spoke of how they were “a dream to work with”.

All in all it was a wonderful day, one that the two would cherish henceforth. Look at those smiles!

Unfortunately, we would learn from Bonnie’s Christmas letter that soon after their wonderful day at PaintFest America, Connie had started to decline in her health. “She was in and out of the Hospital, and I spent all fall and winter visiting her, it made me so upset, especially after all the fun we had in the summer, she was doing so well.”

Despite struggling with her health, when asked what her favorite memory of their visit together was, Connie listed PaintFest America as number one; and for the first time ever, she decided to include a photo on her Christmas cards… a photo of her holding the panel of “America the Beautiful” which she had painted in New Hampshire. 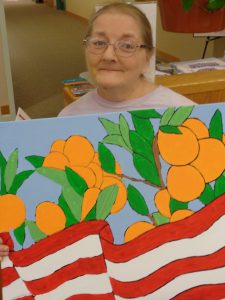 Inspired, Bonnie followed suit and included a photo of herself from PaintFest America. 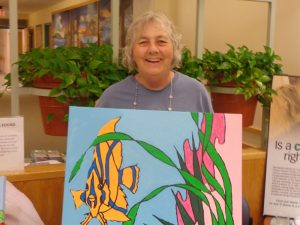 Fortunately, Bonnie informed us recently that Connie is doing much better as Spring approaches, and that she is in a rehab center and has been eating, breathing and talking on her own now.  It is a long process.

The two sisters have made it their goal to make it back to the Norris Cotton Cancer Center to see the mural that they painted hanging on the wall. “Hopefully we can get up there by the time training camp rolls around.” I was so touched by their desire to bring PaintFest America full circle, and I can’t wait to hear about the day that they make it happen. 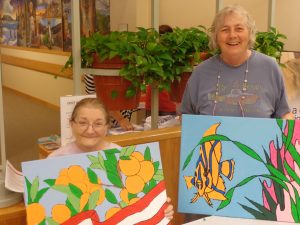 I think it’s worth sharing the way that Bonnie ended her letter to us…she said, “Thank you for organizing that whole affair. You will never know how much it meant to our family and our sister  Connie’s healing.”

But the funny thing is, that’s why we exist, to inspire hope and healing… and it means so much to us, to know that our mission is being fulfilled.