Painting with the Troops

Have you ever been on a military base before? I’m sure some of you have, and know about the high security, or can recall seeing a tank or two cruise down the road. You may have seen a soldier or two… or several thousand.

For those of you who are unfamiliar, as I had been up until a few weeks ago, all of the previously mentioned scenes were bewildering to me. But most striking of all was the fact that these places are their own little cities, made just for the military personnel and their families. Of course, the base is gated, and inside those gates are grocery stores…post offices, homes, lots of homes… and Burger King’s, notably. No one gets inside the front gate of a military base who is not meant to be there. I would know, I couldn’t find my ID, but that is a story for another day.

But, getting back to the point. Fort Stewart is a world of its own. A world that I was not only fortunate enough to see, but interact with on a personal and profound level.

Being a new member of the FFHA team, I am exposed to new and profound experiences on a regular basis. This PaintFest in Hinesville, Georgia, just west of Savannah, has been the most enriching and eye opening thus far.

The plan was simple, let’s paint and touch-up murals with 300 hundred soldiers. We had three different groups throughout the day, and painted with 100 soldiers and their families per session. Our level of need in terms of volunteer support is significant, and we literally had an army to help us. I thought that was pretty slick that we were able to say that.

How was the actual PaintFest event itself? Well, I was smiling from ear to ear the whole time, and so was the rest of the FFHA team. Being in a room with hundreds men and women who so bravely devote their lives to protecting the freedom of our country, was such an honor. Each face was captivating, every conversation riveting. We were in a room full of heroes, and the truth of their heroism was palpable.

As the day went on and each new group of soldiers and family took their seats, I couldn’t help but wonder about each person’s story. Where had they come from, what had they been through to this point…where were they heading? I got to know and interact with many of the service men and women, and some of those questions were answered, but the vast majority remained unknown. There was however one thing that remained clear all day. Painting is fun. Giving back is rewarding. The room was buzzing with color and cheer, and nothing else seemed to matter. 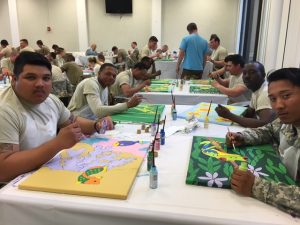 Thank you Fort Stewart for the best PaintFest yet, and for helping our mission in an immeasurable way. But mot importantly, thank you for serving our great country. We truly hope to see you again soon.